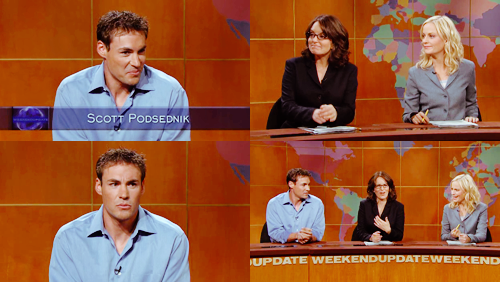 Tina: Amy and I are so psyched that you’re here. We’re big White Sox fans from way back, because you know, we used to live in Chicago.
Scott: Oh really? What part?
Amy: Ah, Wrigleyville.
Tina: Evanston.
Amy: Yeah. So, you know, we’re hardcore Sox fans.
Scott: Really? People from the North Side are usually Cubs fans. And yuppies.
Tina: What??
Amy: What?? No. Yuppies? What? We’re old school, die-hard Chicagoans. We used to hang out at all the gritty places.
Tina: Ann Sather’s Bakery.
Amy: Yeah, The American Girl Store.
Tina: Walgreens.
Scott: Have you guys ever even been to the South Side?
Amy: Hells yeah! We’re South Side all the way, yo! I would always, you know, just hop on the Red Line to Cominsky Field.
Scott: Uh, Amy, that’s Comiskey Park, which is now U.S. Cellular Field.
Amy: I know that!
Tina: I buy all my meats on the South Side! (sings) Moo and Oink-
Tina & Amy: (singing) Moo, moo, moo and Oink!
Amy: I bought my car at Celozzi/Ettleson Chevrolet!
Tina & Amy: Celozzi/Ettleson Chevrolet, where you always save more money!
Tina: I flew out of Midway once!
Amy: Listen, I had a bunch of friends that lived in the Robert Taylor homes.
Scott: Oh really? What were their names?
Amy: Uh, JJ, and uhh, Thelma…
Scott: Listen, if you guys are Cubs fans, just admit it.
Tina: We’re Cubs fans.
Amy: Yeah, we’re Cubs fans.
Tina: She’s a Red Sox fan.
Amy: Shut up, Tina!
Scott: Guys, it’s cool. This World Series win was for all the cursed teams. It belongs to all the people in the Chicagoland area.
Amy: Even Skokie?
Scott: Even Skokie.
Tina: Even Wilmette?
Scott: Even Wilmette.
Amy: Even Schaumburg?
Scott: No, not Schaumburg.

First of all, I love Podsednik. Second of all, this characterization of people who live in Wrigleyville/the North Side is spot on and hilarious 🙂

View all posts by kroblez84